There was plenty to review from 2014 during last night’s annual “State of the City, Village and County” event.

Ezard went first and spent the first six minutes of his speech talking about economic development in Jacksonville. Ezard said no municipal services are expected to be cut this year, the fifth straight year.

He said a household and hazardous waste collection day is coming back to Jacksonville this year.

“Which hasn’t been in a number of years, which is basically the day you take your things out to the fairgrounds, your old paint cans and things and hazardous waste. We’re going to bring that back to this community,” he says. “So, I’m happy to announce that.”

After projects to renovate the north and south ends of the square, Ezard says the city will address upgrades to the east and west ends of downtown.

With parking now an issue in downtown Jacksonville, Ezard referenced the recent purchase of the old Jack Lukeman property. He says that could be turned into a parking lot.

Ezard said construction on the new water plant, as well as the hopeful end of the city’s involvement with its landfill, could both happen in July. Ezard says 3600 feet of new sidewalks were created as part of the city’s sidewalk replacement program.

The mayor talked about a few Parks and Lakes items.

“We’re going to construct a new bathhouse at Lake Jacksonville. Things are so bad out there as far as the existing [one] that we may just take the whole thing down and start over. So, that’s in the budget, and I feel confident that the aldermen will pass that budget with this in it,” he continues.

The fire department responded to 11 percent more calls last year, up to 1,551. There were also more fire-related incidents, up to 83 from 57. That caused $6.9 million in damage. Police numbers were not available for last night’s speech.

Ezard talked about gaming receipts. He says video gaming devices brought in about $190-thousand in revenue last year, which was up from $99,000.

Ezard and Zeller both talked about FutureGen.

“I still think it’s going to happen, where we get a training and visitors center,” Ezard says.

“It’s a political issue, and with that, you just never know what’s going to happen. We’re still very positive, and we’re still looking forward. We don’t have any [new] information,” Zeller says. 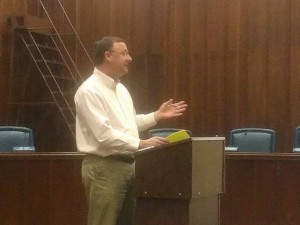 “This is a guarded process, and even though we’re the community that’s going to be hosted on it, we’re kind of on the outside looking in. That’s difficult for us as elected officials to process, because we get questions all the time and it’s hard when you can’t answer them,” he adds.

Zeller started out by talking about the death of fellow commissioner Dick Rawlings and the subsequent election of Ginny Fanning, who was in attendance at last night’s event at City Hall, along with Commissioner Bill Meier.

Besides FutureGen, Zeller also went into detail about the three medical marijuana facilities for which the county has seen plans developed.

“We sat in on many interview with several plays in the medical marijuana field. It was a very, very interesting process. These people had their acts together and they want to get in on the ground floor of medical marijuana,” he says. “They look at it as the end of prohibition. If you can get started, they truly feel that this is going to be a growth industry in the future.”

Jumper talked about waiting to see what happens with the new administration in Springfield regarding the village’s potential medical marijuana facility. The other two potential sites are in Jacksonville and Murrayville.

Jumper indicated there wasn’t nearly as much activity in the Village of South Jacksonville last year as there was in 2013. He cited the progress of First Christian Church and Bartlett Grain Company.

He talked about the 600-foot South East Street extension. Jumper also said there are a number of inquiries about economic development in 2015 in the village. 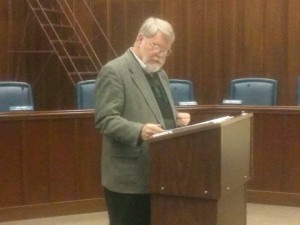 For the full address from all three elected officials, listen below.