This morning, workers began putting up the second arch motorists will pass under when travelling through downtown Jacksonville.

The arch, constructed by Eli Bridge Company, is going up on North Main just north of the Laborer’s Pension Building near the square. It’s the exact same arch that went up in 2012 on South Main Street, as construction begins to come to an end on the North Main renovation project.

Judy Tighe is the executive director of Jacksonville Main Street.

“It’s really kind of neat that this will be the second arch, and both of them [are] sort of a nod to the past when we had the arches on all four intersections back prior to 1910,” she says. “But these two arches are on the two streets that had been closed for nearly four decades.”

A ribbon-cutting was held for the South Main arch as part of the 2012 Downtown Celebration. While we won’t be able to wait until next May for the next celebration to officially open North Main to traffic, Tighe says there are festivities planned. She says North Main will open to traffic on November 24th.

“Just like we did with the square when that opened prior to the project actually being completed, Main Street volunteers went out and we passed window clings to mark the occasion that everybody was able to drive,” says Tighe.

“So, since November 24th will be the first time you can actually drive from Walnut, across the tracks, and all the way straight to the square, around the square and down South Main- it’s been over 40 years- we’ll be out there again handing out stickers to the first 500 motorists that pass by,” she explains.

Tighe says that’ll start around 8 a.m. near the square. The first official designated car to pass through the arch will be chosen by the mayor, but Tighe says that selection hasn’t yet been made. 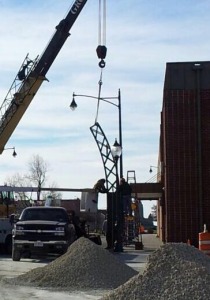 Jim Burke of Hutchison Engineering anticipates a portion of North Main will be open to allow for municipal lot access by early next week.

Burke says there’s still some work to finish next spring, including milling and resurfacing all the streets that have been under construction, putting in decorative crosswalks and finishing any landscaping.