A house was destroyed by fire near a busy area for Jacksonville traffic this afternoon.

Firefighters from Jacksonville and South Jacksonville responded to the blaze at 1627 Old Route 36 west of Jacksonville near the U.S. 67 interchange at around 2:45 this afternoon.

When crews arrived, half of the house was engulfed in flames, according to Jacksonville Fire Captain Brian Nyberg. He says crews were able to stop the fire from spreading further, but that all of the house was smoke-damaged, and partly fire-damaged. Damage totals were estimated to be around $80,000. 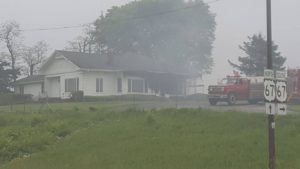 Nyberg says the house was lived in by Bill Borgman. He says Borgman was at work, and the fire started in the kitchen after his girlfriend was cooking. He says she got out OK, and there were no injuries.

Fire crews were on scene for about two hours.

Story corrected. The name of the person living at the house, provided by the fire department, was incorrect.