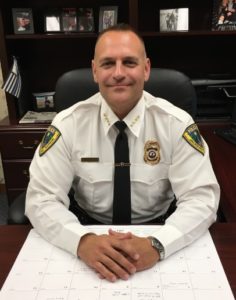 The Jacksonville Police Department is looking to build off of last year’s community outreach success. Jacksonville Police Chief Adam Mefford recently spoke with WLDS-WEAI about the many different community strategies he has for the city. Chief Mefford explains how he wants to maintain several programs while also starting new ones.

“We are looking at continuing our community outreach programs like we started last summer with the boots on the ground. We also had the teens citizens police academy that got us closer with the teens in the community and we are going to continue building on those programs this year. As well as we are going to implement some of new programs, one is a senior citizens programs and give them programs on safety, scams and other situations that individuals might target our senior citizens in the area. So were are looking forward to getting some of those programs started.” said Mefford.

The JPD are putting the finishing touches on the new training center. Chief Mefford says the new center has helped more than just local officers.

“The training center is almost 100% complete, we are just waiting for the ground to thaw out to put the last of the signage up out there, the warning signs and the rules and things like that. Once we get that done,the center will be pretty much be complete. We really got the ball rolling in May when we opened it, and since May we have trained over 400 officers, state, local and federal and held over 22 training classes at the center. We are not only benefiting the Jacksonville Police Department but state, local and federal agencies are benefiting from the training center.” said Chief Mefford.

Students from else around the Land of Lincoln and states like Missouri are coming to Jacksonville to learn from the best.

“Our first training scheduled for 2018, we had to cut off the amount of students who wanted to come because we were over capacity. We can hold up to 80 students but we had to cut off at 78 to make ensure everyone had seating. The word is getting out and it’s a nice feeling that Jacksonville is able to go to the for front and bring these officers in and provide specialize training, and updated training and re-certifications, it’s going to benefit all the communities around to have better trained police officers.”  said Mefford.

Police Chief Mefford says his strategies are very fluid and try to provide the best quality police service for the city of Jacksonville.