A Jacksonville native who has shared several encounters with Barack Obama during his political career was among the Springfield crowd this week when the President addressed the Illinois General Assembly.

Anna Koeppel, who works in Springfield for the Laborers’ International Union of North America, first met Obama while attending Jacksonville High School in 2005. At that time, Obama had been an Illinois Senator for about eight months.

Koeppel says Obama was visiting Jacksonville as part of his “Listening Tour” across the state. 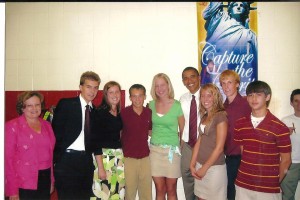 “It had been about a year since his speech at the 2004 Democratic National Convention that made him known nationally. I remember he made a joke about how even though he had become famous from this speech he had given, he was still a freshman senator who was learning the ropes.”

When Obama delivered his Presidential Campaign announcement in 2007, Koepell made the drive from the University of Missouri to the Old State Capitol.

“I mainly remember that it was extremely cold and we were there for hours. There was a really big crowd and we could see all the news cameras. I really felt like I was present for a significant moment in history. I especially noticed the amount of people who were really excited about the possibility of his candidacy. Even though it was really cold, it was really special to be there.”

In 2012, Obama spoke in the Quad Cities. Koeppel volunteered to help with the event and for the first time was able to listen to Obama speak as the President of the United States.

Koeppel’s latest encounter with President Obama was on Wednesday in Springfield. Koeppel was fortunate enough to grab a ticket to the Hoogland Center for the Arts, where President Obama addressed some of his supporters after his speech to the General Assembly.

“I stood in line for around 45 minutes outside before the doors opened to get a good spot. It was worth it, because I got to be right in the front row. When he was talking to the legislators, I think he showed a really good understanding of the challenges legislators face.”

“The President showed a real understanding that there are people in the legislator that are trying to do good work and make a difference, even though they might not agree. It can definitely be hard to accomplish things.”

Koeppel says President Obama referenced a study during his speech this week that really opened her eyes.

“The President made the point the state that most represents the makeup of the United States is Illinois. We have older people and younger people, people who are poor and super rich, a diversity of urban and rural and then we have Chicago versus farms. We should try and be a model for the rest of the country.”

Over the past few months, Koeppel has noticed President Obama “is true to the values he holds, without having to worry about getting re-elected.”

To hear more about Koeppel’s encounters with President Obama, click below.