Around one hundred local high school students joined in what has become a nationwide movement of American teenagers speaking out about their views on gun regulations in the wake of last week’s school shooting in Florida.

Dozens of students came flooding out of the front doors at Jacksonville High School shortly before 10 a.m. today as part of an organized walk-out regarding their stance on gun laws. Today’s walk-out was organized by three JHS students, 18-year old Gracie Miller, 17-year old Sadie Finch and 18-year old Ryley Savage of Woodson.

Miller gave a brief speech to her fellow students before holding a moment of silence for past victims of school shootings. She explains how today’s walk-out came about, and the message they hope to get across.

“We decided to organize this to show our support for stricter gun regulations and also a memorial for past school shooting victims. It’s scary to think that maybe we’re starting to get desensitized to it, and that’s why we wanted to have this walk-out, to remind people that this is still a scary situation and it’s closer to home than we think. We’ve had a lot of really positive feedback from the people we’ve spoken to in regards to adults, but we’ve also come out here today to remind them that this is something that we’re aware of and that we want to be involved in our own futures,” Miller says. 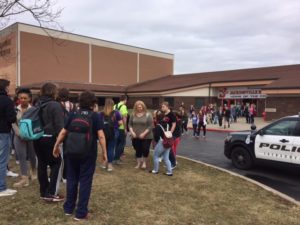 Gun control being the hot topic that it is, Miller wanted to make it clear that the group isn’t seeking to eliminate guns completely, but rather to make it more difficult for firearms to reach the hands of potentially dangerous people.

“We get a lot of people who believe that we’re out here to stop the sale of all weapons or that our focus is to stop hunting or shooting for sport, and in a sense, it would get harder…But our main focus is on keeping the guns out of dangerous hands. That’s what we wanted to make sure people knew our message was about,” says Miller.

Towards the end of the walk-out, Miller asked her fellow students to take out their cell phones and take videos of the event. She says social media is the most essential platform when it comes to spreading a message, especially for her generation.

“(Social media) is honestly the most powerful tool that we have at our disposal. So we wanted to use it in the most positive and effective way we could think of,” Miller says on spreading the group’s message through apps like SnapChat, Twitter, Facebook and more.

Jacksonville High School Principal Mike McGiles as well as a Jacksonville Police Officer were also on hand to see that the walk-out remained peaceful and organized. Principal McGiles says that he’s proud to have students that are willing to take such initiative on important issues, and that they did so in an organized, non-violent manner.