A local comedy group is hoping to pack Playhouse on the Square this weekend for their latest television special.

Lets Make Up, which consists of two Illinois College students, three post graduates and local director Ken Bradbury, has been featured on CassComm H2 throughout 2016.

Performer Erin Washington says the group was brought together by their love of improv at an early age.

“We’ve been doing improv at performing arts camps at Green Pasture. We were all campers in 6th grade and have just stayed friends. Last summer, Ken asked us if we wanted to do an improv group and we jumped on it. First we tried to write sketches for it, but now we just do improv games. There isn’t an improv group that we know of, outside of Illinois College. I just think it is a really cool thing,” says Washington.

Washington says each performance has drawn a larger audience. While the group hasn’t gotten famous yet, the television specials have been a blast.

“It is something where we can involve more people than the live audience. It is something we can advertise on Facebook and tell people it will be in their living room and to watch it.”

The next episode is being recorded on Sunday at 6 p.m. 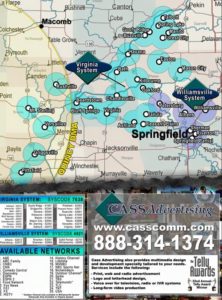