A lifelong Chicago Cubs fan from Jacksonville is responsible for the infamous hands-helmet social media is buzzing about.

On Wednesday night, the Chicago Cubs punched their ticket into the National League Division Series by beating the Pittsburgh Pirates 4-0 in a win-or-go-home Wild Card game.

While the baseball world stood in awe at Jake Arrieta’s shutout performance for the Cubs, the real question fans were asking after the game was “what was on second baseman Jonathan Herrera’s head?” 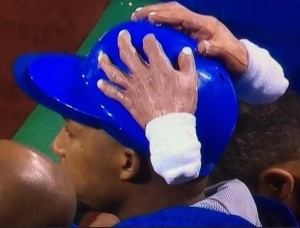 It turns out local Cubs fan Kyle Horton is the brains behind the creation. Horton says the motivation for the hands-helmet came from a new tradition started by Cubs hitters this season.

“The Cubs have been rubbing their helmets for good luck. Me and my three buddies always try to take ridiculous things to the games. I just kind of put it together. It was an idea I had and the stuff for it was just laying around the house,” says Horton.

Horton says the legend of the hands-helmet started in Milwaukee last week when members of Chicago’s bullpen noticed the helmet in the stands.

“We were sitting in the bleachers behind the Cubs bullpen and Pedro Strop came over in the 7th inning laughing hysterically. He was with Hector Rondon and Fernando Rodney. I asked Strop if he wanted it and he loved it. He came over and traded his hat for my helmet,” says Horton.

After the conclusion of the series, pictures of Cubs players wearing the helmet started appearing all over Twitter. 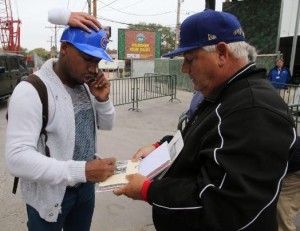 During Wednesday’s win against the Pirates, the camera couldn’t resist showing Herrera racing around the dugout wearing the beloved hands-helmet. 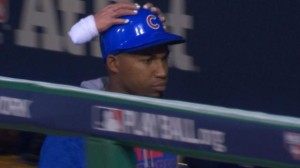 Horton says seeing the hands-helmet embraced by the Cubs roster on national television is an overwhelming feeling.

“I think every time I see it on TV I just laugh, because everybody thought it was ridiculous. I think it is still ridiculous. For a Cubs fan to see his favorite team have it and embrace it like that blows me away. It is literally the best thing for a Cubs fan. I had no intention of the Cubs even wanting it, so the fact that the club has it is amazing to me,” says Horton. 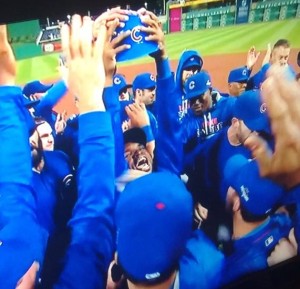 Horton says the possibilities are endless for the hands-helmet creation.

“I’ve been told by a lot of people that I need to patent it and start making them. I don’t think it was ever about the money or mass producing them. It was just stupid fun with me and my friends that has turned into something quiet insane,” says Horton. 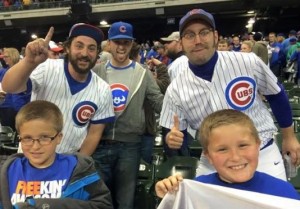 Postseason history will be made on Friday when the Chicago Cubs and St. Louis Cardinals meet for the first time in the playoffs.

Horton has already purchased his tickets to Game 1 and says you may spot him on television wearing a replica model of the hands-helmet.

To keep the momentum of Horton’s creation alive use #handshelmet on social media during the Cubs postseason run.