The race for Illinois’ 50th Senate District seat is adding another name from Sangamon County.

Late last week, the Sangamon County GOP’s central committee officially endorsed assistant state’s attorney Steve McClure in his run for the Senate seat currently held by Senator Sam McCann.        Petitions will go out to circulation today for the primary election in March 2018. Apearing on the ballot come March 20th will be the 33-year McClure. 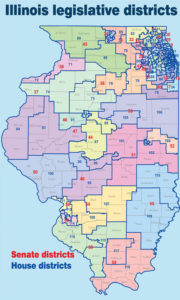 As for why McClure wanted to jump into the race for Senate, he says there are a number of issues that McCann and himself don’t see eye to eye on.

“I’ve been a public servant my entire professional career. I left law school and immediately started in the state’s attorney’s office once I passed the bar, so I’ve always wanted to serve the public. As far as why I wanted to get involved in this race, it just comes down to the fact that there are quite a few issues that Senator McCann and I disagree on, and I look forward to a very vigorous campaign where we can debate these issues and the people can make the decision as to who they want to represent them,” says McClure.

McClure explains what his some of his basic political principles are, and other factors that prompted his decision to run.

“I’m a pro-life Republican, I support traditional family values, I’m a fiscal conservative, and I want to do everything that I can to turn this state around. One of the other major factors that has influenced me getting involved now is that I’m one of three kids, and my brother lives and works in New Jersey and my sister works in Manhattan. All the people I knew in high school that were close friends of mine, they’re all out of the state or in Chicago, and I want to help create a better economic environment for businesses to grow, to come here and to thrive and to stay here,” says McClure.

Squabbling and disagreements among members of the Illinois General Assembly has been well-documented, from things such as the state budget stalemate to the more recent school funding situation. As for how McClure hopes to handle negotiations under the climate, he says he’ll use his background in the field of law. And while he says he’ll reach out to the other side of the isle to foster bipartisan relationships, McClure says he won’t do so at the expense of his political principles.

“I’ve been negotiating for the last five and a half years because I have to work with Defense Attorneys and I have to negotiate with them. And when I speak to them and I tell them something and they tell me something, your word means everything. If I’m lucky enough to be elected to the position of the state senate, I will reach across the isle to work on issues that I can, but I will not compromise my principles. I am a conservative Republican and I am going to be absolutely determined to turn this state around. But I think there are probably agreements that will be had on both sides,” says McClure.

In a response email, McCann said “he will continue to stand with the people of Illinois and not worry about what Washington D.C. lobbyists and elites have to say about me.” Senator McCann also went on to cite his record of voting on issues he believes reflect true to the core principles of the Republican Party.