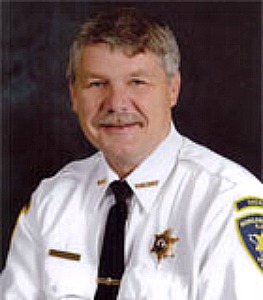 A Morgan County Sheriff candidate is getting an endorsement from the man who currently holds the position.

Sheriff Randy Duvendack, who will retire soon, has endorsed his chief deputy Mike Carmody. In a letter to the Journal Courier, Duvendack wrote about how he believes Morgan County has two great qualified candidates.

Sheriff Duvendack spoke with WLDS/WEAI and explains why he hasn’t endorsed anyone sooner.

“As everybody knows, this campaign has gone on for about a year now and I’ve done my best to be far to both sides. One of the side effects of that I think, some people may have questioned my motive. Was there something, I didn’t support my chief deputy? That was the last thing I wanted to do, in a way I thought I would be hurting him and that’s not what I wanted to do. So I did write the letter and hopefully that cleared the air that I did support him and my reasons for doing it. I wish him the best of luck.”  said Duvendack

Sheriff Duvendack talked with Chief Deputy Mike Carmody this morning about the letter.

“I think he appreciated it cause I think he got asked questions. I know how it goes campaigning and people ask questions and people wondered where I stood. This is not an anti Chris Johnson statement at all, it’s just the fact I want people to know I support my chief deputy and I wish him the best of luck.” Duvandeck explained.

Election day is only a week away and Sheriff Duvendack is counting down the days.

You may cast your vote for the new Morgan County Sheriff on Tuesday March 20th.

Morgan County is fortunate to have two qualified candidates willing to serve this county as the next sheriff.

Like everyone else, I have watched this race with great anticipation of who the next sheriff will be. I have tried to remain neutral out of respect for both sides. Still, I am asked on a daily basis whom I support.

I am afraid some people may perceive my lack of publicly campaigning for my Chief Deputy Mike Carmody as a lack of support for him. Actually, just the opposite is true. I appointed Mike Carmody as chief deputy when I was first elected in 2006. I knew he was well-qualified and knowledgeable of all the functions of the sheriff’s office.

During my three terms as Morgan County sheriff, Mike has been involved with many improvements and changes in the office. When I was out of town or unavailable, I was confident he could handle any situation that would arise.

When Mike cites his qualifications and experience, they look similar to my qualifications when I first campaigned in 2006. Mike is well-equipped to serve as the next sheriff and, to be clear, he has my unconditional support.