Seven people were arrested at a house at 739 North East, including four residents.

Fanning was also arrested for possession of meth, while Huff was picked up for use of property.

“One of our agents received information that there was possibly some meth being manufactured at that residence. He coordinated with the Jacksonville Police Department; they wound up at the house, secured the house got a search warrant, called in the state police meth response team, and they wound up arresting those seven individuals,”  says Master Sergeant Jamie Jackson with the Central Illinois Enforcement Group. 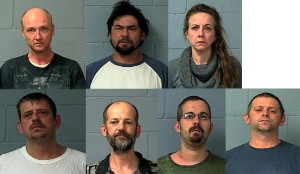 Two long-time residents in the neighborhood we talked to couldn’t believe something like was happening just several houses away.

“I don’t care for it. I didn’t know it was going on,” says Jeannette Defrates.

“I’m in shock due to the fact that my daughter plays with their children. I was not aware that there was a meth lab a couple doors down,” said a neighbor who didn’t want her name used on the air. She says you don’t expect something like this to happen in practically her own back yard. “I guess you never know what really occurs so close in your neighborhood,” she says.

Jackson wouldn’t comment on the involvement of the other five people arrested in the alleged meth operation. He says the investigation by the Central Illinois Enforcement Group is ongoing.

“We’re trying to sort out who was technically living there, and who was staying there,” he says.

William and Ronald Fanning, as well as Huff and Mullens, remain in custody. Northcutt, James and Richard Fanning have been released on bond.