One of the engineering agreements is for Benton and Associates Engineering Firm to be the lead on professional engineering services during construction and the bidding process for the new plant.

“Construction phase services include everything from participating in the pre-construction conference to providing shop drawing reviews to providing project management during the construction process and working with the general contractor who is the successful bidder,” he says.

Two other contracts were for specialty MEP services- Mechanical, Electrical and Plumbing- with Midwest-based Clark Dietz, and the other is for architectural services with Oates and Associates out of Collinsville.

Resolutions for easements with the new plant, as well as easements for the Mauvaisterre Creek pipeline stabilization project in the Chapin area, were given the thumbs-up by city council.

“The other easement is associated with the transmission line where it crosses Mauvaisterre Creek was to protect that raw water transmission mane, because that’s where a majority of our raw water comes from down at the wells in Naples,” he continues.

The city is still working on acquiring the easements, but Benton says the process is going well.

In total, the items approved by aldermen cost about $336-thousand. Benton explained to aldermen the current price tag for the water project is between $30 and $32-million, which is down from previous estimates of $34 million.

Benton told city council Benton and Associates is currently seeking bids for the construction of the new plant and has gotten over 20 interested companies, most of which he said are from the area. A pre-bid meeting is set for Thursday, and the project will be presented to the Jacksonville Plans Commission next week. 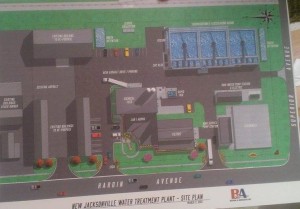 Also last night, city council approved a collective bargaining agreement for the Jacksonville Police Department’s command staff and dispatchers, as well as a labor agreement for the water-sewer department employees. Mayor Andy Ezard says a two-percent raise for the next four years was the agreement.

“That’s been consistent with what we’ve done for the last couple years with folks that are non-union. I was impressed that we got it done this quick,” he says.

City council members unanimously approved a resolution urging Governor Bruce Rauner not to cut funding to local governments, which is one of many budget cuts the new governor wants to implement. It would cost Jacksonville about $962-thousand in lost revenue.

“Many communities are doing this just to have a legal document to send to the governor’s office. I know this is a proposed budget. I’m very respectful that [the governor’s] going to have to make tough decisions, but cutting another government unit and then going down the municipality level for mistakes that have been made on the state level, I feel is unacceptable,” says Ezard.

“The council feels that way too, because it would really hurt the city to the tune of almost a million dollars of services that we would then have to cut.”

Aldermen also approved a new security contract with Centurion Security Services for security at Lake Jacksonville for the 2015 season.

Notable Jacksonville residents Marty Acosta and Ron Gray were honored with the Community Pride Award for their work on the Community Park bandstands. (Pictured below) 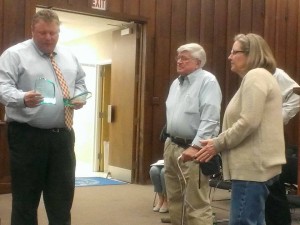