Jacksonville residents got a sneak peek at proposals for a new dog park in the city at the municipal building on Monday.

A presentation from a team of student engineers at the University of Illinois Urbana-Champaign detailed two proposals for the land west of Nichols Park. One theme was “naturalistic”, while the other was “contemporary”.

U of I Professor Lara Browning, who is working with the student group, summarizes the proposals and the feedback they got.

“The idea from the naturalistic concept was to have kind of a well-maintained lawn towards the street side and then as you move towards the lake, to go kind of towards the natural landscape,” says Browning.

The consensus among those in attendance was to combine the two ideas. It was said that the naturalistic proposal was more expensive to maintain in the long run because of the number of trees.

Besides the style, there were noticeable differences between the two proposals, including the number of dog-washing stations, pavilions, ADA-accessible pathways, parking space, and a switch-out on whether the area for the larger or smaller dogs had more acreage.

“You’re lucky, it’s actually a decent-sized property, so even the small dog section is pretty large for a small dog park. Obviously there’s going to be a little bit more land going towards large dogs. It’s not that small dogs can’t use it, it’s just people need the option to separate their dogs,” explains Browning.

“I think it’s ended up being about an acre to an acre and a half for the small dog park, to about three acres for the larger, so, both end up being decent-sized pieces of property.” 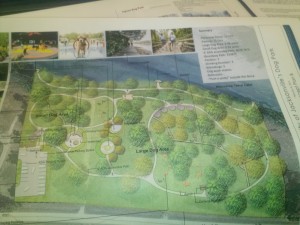 Most of the elements of the proposal are intended for future phases. Parks and Lakes chair Marcy Patterson estimates the majority of the $100-thousand prize won by the city from the Petsafe Bark For Your Park contest will be spent on a fence.

“It’s amazing, and it’s sad, but we all knew that. That’s why this committee has done such a remarkable job of fundraising.”

Paul Lonergan, who heads up the Jacksonville Bark For Your Park Committee, estimates about $4,500 has been fundraised so far since Jacksonville won the PetSafe grand prize.

Besides the fence, here’s what Patterson thinks will be the immediate features of the park:

“We believe there will be a fence around the entire property, there will be a porta-potty for people, and some defined parking, so that people can have access to and from the property without much problem, and hopefully maybe some solar lights so people are able to see out there a little bit, but that’s going to be the only thing we believe will be covered in Phase One prior to it being open in August,” says Patterson.

Browning expects to have a plan ready by spring.