Law enforcement and emergency medical personnel from all over Scott County gave opinions on- and asked questions about- the possibility of the county joining a new 911 service Thursday night.

Since Morgan County, the City of Jacksonville and Passavant Area Hospital reached an agreement on a combined dispatch center late last year, Greene County and Calhoun County have jumped on board. An intergovernmental agreement has been sent to Scott County asking them to join the new dispatch center. 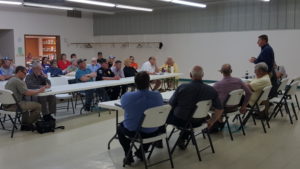 Two big concerns given from those in attendance at a public hearing at the University of Illinois Extension building in Winchester were timing and money.

Per new legislation, Greene and Calhoun Counties needed to join an existing 911 system because they did not have dispatch centers of their own. Scott County does have one, however, and, as several people pointed out, does not have to change anything right now.

If Scott County stays independent, it would just have to make sure it’s dispatch equipment is “next generation” by 2020.

Morgan County Emergency Services Director Phil McCarty, speaking on behalf of the soon-to-be West Central Emergency Telephone Services Board, says doing this now makes for a smoother transition, as the combined dispatch center is being put together currently, than if Scott County were to join at a later time.

“As we evolve with the other two unserved counties, it’s a perfect fit for us now. If they don’t want to move forward, it’s OK. We can address it in the future,” says McCarty.

As for the financial end, it was indicated that being part of the dispatch center would cost more than the $80,000 the county raises in annual 911 revenue collected from cell phones and land lines.

“That’s a big concern, because Scott County isn’t blessed with a lot of money in their coffers to do anything above and beyond what they have to do, says Scott County board member Bob Schafer.

McCarty noted there was talk last night of making sure funding gets split fairly.

“I think we want to make sure it’s being split appropriately, and I think we’re going to immediately address that and make sure the funding’s going where it needs to be. That got pushed to the front of my plate tonight,” he says.

With part of the aim of the new 911 law being consolidation, Cindy Barbera-Brelle, hired earlier this year at the first statewide 911 administrator, noted that if Scott County joined the Morgan-Greene-Calhoun dispatch center and then opted out, they’d have to find another co-op, and couldn’t go back to being solo.

There were other concerns expressed, such as the potential loss of personnel in the county and inadequate representation on the ETSB board. Pike County Sheriff Paul Petty asked that the impact of this agreement on the sharing of services between Scott and Pike Counties be considered.

“We’re going to look at what’s there, and look at the agreement, and whether this is the time or place to do it. Maybe it’s not. That’s something the county board’s going to have to really seriously look at, and then go from there,” he says.

The board meets on Mondays at the Scott County Courthouse. At this point, Schafer says a vote isn’t on the agenda.