Rauner toured the building, spoke to students in a classroom and then held a question-and-answer session with a large portion of the school’s students inside the Pretzel Dome.

Speaking to reporters afterwards, Rauner criticized Democratic State Senator Andy Manar’s Senate Bill 231, which is his latest school funding proposal, a day after it passed in the Senate.

“That plan per se doesn’t work. I personally don’t support that. However, I want to encourage the Senator and the members of the General Assembly, keep working, come up with some different ideas,” Rauner posits.

“I’ve studied now the funding formulas for more than a dozen other states around America. These are complex issues. Number of students, number of students in poverty, property tax wealth, tax base- many factors go into determining a funding formula. I don’t think there’s any silver bullet, no magic right answer. But we’ve gotta continue to have a discussion and negotiation and good faith and come up with a bipartisan solution,” he says. 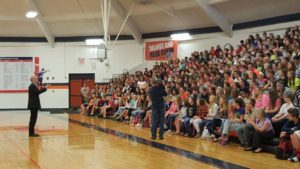 Rauner continued his push for education funding reform by asking legislators to give him a no-strings-attached standalone K-12 school funding bill.

“We should not allow our school funding to be held up, held back, while a new funding formula is argued about in the General Assembly. There are some Democrat leaders in the General Assembly who have said they would like to not let schools get funded this year and not open on time unless the funding formula changes and Chicago gets a lot more money. That’s wrong, we should not allow that to happen. Every school district should be treated fairly,” he adds.

“We lose approximately 57 percent of our general state aid. We obviously are trying to do the best we can do for our students. But, after years of proration, it is coming to a tipping point,” says Ehrman.

“There’s only so much that we can do. We are providing an education that is not prorated for our students, but the funding that is coming in for our students is prorated, and if that proration drops down significantly further, we’re going to have to have tough conversations, which is hard, because these students don’t deserve these conversations. All of our students deserve adequate funding, and we hope things can be done in the future to provide that funding for our children,” he continues. 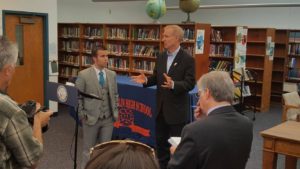 Ehrman also talked about purchasing food for New Berlin students at a cheaper rate using a procurement agency, but says the process has been hampered by burdensome regulations. Procurement reform is an issue Rauner has urged Democrats to take up previously.

You can hear more from Ehrman and Rauner by clicking below: