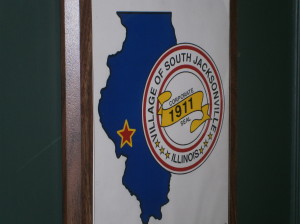 The renovations to South Elementary continues to move forward following a unanimous vote to start road work outside of the school. During yesterday’s monthly Board of Trustees meeting, the Village of South Jacksonville approved the proposal by K.E. Vas to start construction on building new storm sewers, new curb gutters, new streets, new side walks and a new drive into South Elementary.

The work is set to begin on April 1st. Jim Burke is with Hutchinson Engineering and says the project is estimated just over a million dollars.

“We had three biders, about six plan holders, the low bid was a local firm that has done a lot of in the village. Indications are they are probably going to start on the 1st of April. It is going to be a fast and furious project, a lot of work to get done for a short amount of time, we are keeping our fingers crossed that the spring will be good to us and the very first thing they need to do is lay the some storm sewer and relocating the utilities,a lot of underground work to start with so we really need a drier spring if we can get it.” Burke said.

When you’re dropping off the kids or driving near South Elementary,you won’t have to worry about the construction interfering with your commute. Burke says it won’t be an issue.

“The nice thing about the existing road way is that it’s fairly wide so we will be able to work on one side of the road and still maintain traffic during construction during the remainder of the school year. The first part of the work will be removing trees that are a part of the project and that will be done during spring break so those will be done and cleaned up.”  Burke explains.

“The village has always been progressive and the tiff funds and the direction that the village likes to go continually to moving forward and wanting to improve their town and this is a project that has been on our radar for a long time and knew it would come when the school project to get underway, we would be doing the project in associated with it.”  said Burke

The approval will use hot mix asphalt all around the school and not concrete. Expect to see construction at the start of spring break. The crews will begin by removing trees and other plants in the way of the construction.