According to John Gotschall, 40 years goes by pretty fast.

It was announced earlier this year that John Gotschall would be celebrating four decades as a member of the South Jacksonville Board of Trustees. Last night, Village Treasurer Tiffanee Peters decorated the Village Boardroom with balloons and chocolates and cupcakes, all to celebrate the man that many South Jacksonvillagers best know as Sherm.

Before the Board of Trustees meeting Thursday night, Village Hall was a gathering place for members of the Village to celebrate Sherm and offer their gratitude for his decades of loyal service to all the local residents.

John Gotschall is usually a man of few yet wise words. Last night though, he seemed quite peppy and in the celebrating spirit and very talkative. Gotschall offers his thoughts on how the opportunity to serve the Village for forty consecutive years has impacted his life.

“It’s been an honor to serve the village for 40 years. We’ve had a lot of ups and downs, but we’ve have a lot more ups than downs. I just really would love to give a thank you to the two men who helped me find my way onto the Board of Trustees.”

Gotschall describes how a bad roadway problem led him to become a Village Trustee.

“Our streets were full of potholes. The village had spent all their money on East Vandalia on a new concrete street. So I came to the village board and I told them I’d like to get some neighbors willing to come up with a donation to gather some money to buy some blacktop to fix these potholes. Apparently, this made them mad, and the next day they were out fixing potholes. Right after that, I became a member of the Village Board.”

As pictured, Gotschall was awarded the Key to the Village by Mayor Jennings.

Because this is the fortieth year of service from Gotschall to the Board of Trustees and a South Jacksonville Trustee’s term lasts four years, he will be completing his tenth term as a Village Trustee. Gotschall has announced that his seat will be open for another person to be a representative of the Village. He will officially retire from the village in April after the election. 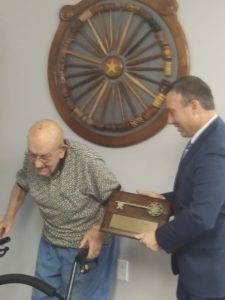 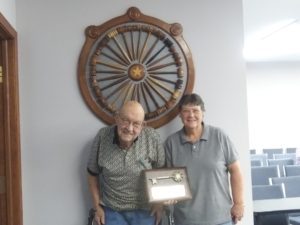 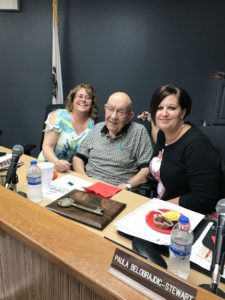