Week 3 Results Do Little In Shaking Up Coaches’ Poll

Week 4’s Top 10 AP High School Football Polls has the WIVC taking over in Class 1A. Most of the remaining classes remain relatively unchanged as we head into mid-season. Springfield High (3-0) overcame some suspended players to thump Decatur-Eisenhower 57-13 last week. The sizable victory saw the Senators leap one spot in Class 6A […]

Jacksonville celebrates homecoming tonight with a Central State Eight opponent.             Jacksonville invites in Glenwood from Chatham. The game will be broadcast on WLDS, starting at 6:30.             The feature game on WEAI comes from Palmyra where Greenfield-Northwestern hosts North Greene in south division play in the Western Illinois Valley Conference.             Elsewhere, Routt heads […]

Governor J.B. Pritzker says he’s leaving the call of sports up to local school districts. Currently, the IHSA doesn’t have a uniform policy on quarantine and suspension of play when it comes to current sports seasons. According to IHSA Assistant Executive Director Matt Troha, there is no specific policy for exposure, quarantine time, or return […]

The Central State 8 and WIVC Conference continue to place multiple teams in the AP State Ranking Coaches poll for Week 2. The rankings released today showed a few moves from the preseason ranks released last week. Springfield High jumped from #10 up to #7 in Class 6A this week after their 39-36 victory over […]

Carlinville’s Kelsey Card bid for a medal at the Tokyo Olympics came to an end yesterday. Card finished in 28th place, well out of the Top 12, to qualify for the finals on Monday. Card’s best throw was 56.05 meters just behind teammate Rachel Dincoff. Teammate Valerie Allman of Austin, Texas leads the list in […] 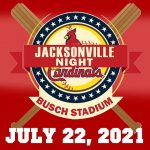 Cardinals fans got a treat last night as the Redbirds took the series win in the finale 3-2. Dylan Carlson and Nolan Arenado homered for the Cardinals.  Cards’ hurler Kwang Hyun Kim gave up just two runs over six innings to pick up the win.  Alex Reyes got the save for St. Louis, which has […]