A campaign kickoff event was held for a Morgan County State’s Attorney candidate on Sunday.

Democratic hopeful Tyson Manker shook hands with about a hundred people in attendance at the Amvets building in downtown Jacksonville.

“Most important to me is to bring back some integrity to the office, and give people the opportunity to believe that things are being done on the up-and-up. So, I plan on running an honest campaign and being an honest state’s attorney,” says Manker.

“And then, on top of that, specific initiatives like the veteran’s court. I know from speaking to all the veterans in the area, they’re extremely excited about finally, six years after the law was passed, somebody standing up for them and actually putting into place the veterans treatment court, which is exactly what I plan to do,” he continues. 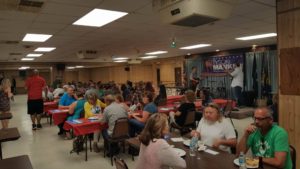 The event also served as a fundraiser. Manker has mostly self-funded his campaign, which had $3,000 at the end of March, according to a quarterly filing by the state board of elections. That’s about half of what his opponent has raised. Manker says for him, this won’t be an expensive campaign.

“I plan on putting out some yard signs and maybe providing shirts for individuals that want it. But, that’s about it. I don’t plan on getting too ridiculous. I think money in politics is one of the biggest problems we’re dealing with today. It’s a catch-22,” Manker says.

“It does require some money to do t-shirts and banners and stuff like that. But, we’re not gonna get to crazy. It’s a local race, anyways.”

Manker will face acting state’s attorney Gray Noll, who was picked by the Morgan County Republican Party to succeed Bobby Bonjean, who stepped down at the end of last year.