Local Boy Scouts had the chance to enact an “historic vote” at last night’s Jacksonville City Council meeting when they passed a $32 million bond measure.

Of course, they were under the direction of aldermen, who unanimously decided to proceed with the plan to pay for the city’s new water treatment plant going up on Hardin Avenue. The bond covers a 20-year period.

With the Boy Scouts taking over as part of Boy Scout Citizenship Day, city council first voted for an emergency clause to pass the bond issue on first reading.

That was a 7-2 vote, with Steve Warmowski and Marcy Patterson the “no” votes, and Adonnis Shaw continuing to not be present following his arrest last month.

Warmowski says he wanted public participation for the $32-million vote.

“So, even if it’s a technical vote, even if it’s just something that we’ve been talking about for two years or so, that we’re going to do this, still, when you get to the point where you’re actually going to spend the money, I think the city council should follow the rules, have two votes over two meetings, so that if there’s any input from the public, they have a full chance to do that,” Warmowski says.

Jamie Headen with Benton and Associates, the engineering firm designing the new facility, says passing the debt-authorizing ordinance allows the city to seek funding with the Illinois SRF Low-Interest Loan Program. He adds it was the recommendation of the city’s bond council in Springfield to execute the bond now.

“The terms are always changing. We know the terms and the interest rates now, and they’re good until September 30th,” says Headen. “So, the council moving swiftly on past actions and getting towards funding and getting ready to bid for the project is a good idea, and that’s the action they made tonight.”

Headen said another reason to act quickly is the “unknown” factor with a new governor in office.

He notes the Clean Water Initiative was enacted by previous governor Pat Quinn, which prompted the SRF Program, and while the funding is still there, Bruce Rauner has directed state agencies to freeze non-essential spending. 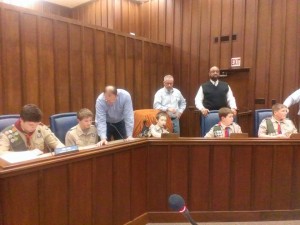 Previous estimates for the water plant had been around $30 million. Mayor Andy Ezard says the amount being executed in the bond is a contingency.

“We hope, obviously, that it’s a lot less than $32 million, but at this time, we don’t known,” Ezard says. “They’re still designing it, and as we go through the process, hopefully we’ll stay under that dollar amount.”

Aldermen approved advertising for bids for the construction of the new plant. Headen said bid-letting is expected to take place next month.

In other action last night, the city approved a new police dispatching agreement with the Village of South Jacksonville. Aldermen Mike Wankel announced the Lake Mauvaisterre Watershed Project has been put on hold, and there won’t be an update most likely until June. 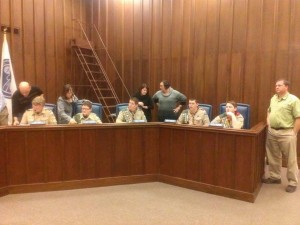 City treasurer Ron Smiljanich, during his semi-annual presentation on Jacksonville’s revolving loan fund, says all of the businesses with a loan from the city are current on payments.

Pictured above, with Boy Scouts correlating with aldermen and other officials from left to right:

Here’s the audio for the Boy Scout Citizenship Day: