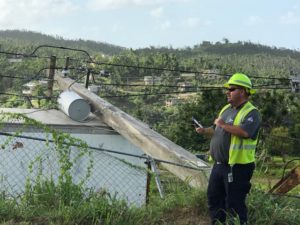 It’s been nearly a half a year since hurricanes thrashed Puerto Rico. Hurricane Irma left many people without power. We are in the second month of 2018 and there are still thousands people in the dark. Ameren Ilinois and Ameren Missouri are sending people to the American territory to help those in need.

Ameren crews will be deployed will be deployed in three week rotations. Brian Doran is an electric supervisor with Ameren Illinois-Maryville and he is one of 24 workers who is from Illinois to help turn the lights back on. Doran and his crew flew out on January 26th and expected to return on February 19th. Since then, the team stays at a hotel about 30 minutes from his work site. Doran joined our WLDS “What’s on your mind” earlier this week and says, power in Rio Grande is slowly being restored.

“You said it correctly, slowly being restored. We pretty much have to do, the line we were assigned to do, we have to start at the beginning. Start down the main line, getting the poles fed, the lines back up. There’s a lot of vegetation. It rains almost everyday here and the temperatures are up in the 80’s. It helps everything flourish. We have to go to almost every house and make sure everything is good before we throw before we throw the main switch on.” said Doran.

One of the struggles Doran and his crew has faced is the language barrier between English and Spanish. Overall, the Ameren have founds people to help translate. Despite the minor issue, Doran says the community at have been nothing but supportive.

“The community down here has been great. To come into a community that has been out of power for about 5 months, you would think the people would be broke down. Fortunately they have learned to adapt with to live without power the last 5 months.” said Doran. “We have had several occasions churches and communities provide us lunch. We can’t bring in everyone so we will have the supervisors take it out to the job with them.” 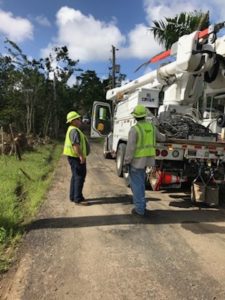 alks about how much it means to help out a community in the dark.

“It’s great, the crew I have right now, we are working on a little neighborhood and they are bound and determined to get them turned on before we go home on Monday. We have had people break down when they turned the power back on. She started hugging them and started to crying. There is no better feeling in the world that you helped somebody and they can get back to a normal life.“

Ameren Illinois is a member of the Edison Electric Institute (EEI). It is one company of many to send workers to Puerto Rico. There are more than 5,500 workers in the U.S. Territory restoring power.

To listen to hear the whole conversation from “What’s on your mind”, just click on the link below.