We had basketball last night at two locations. On WLDS, Jacksonville lost to Glenwood 50-42 for the second time this year. Triopia tumbled in a conference game against Routt Rockets 63-36. In the CS8, Southeast is at Lanphier, SHG smashed Springfield High 69-29, Lanphier downed Southeast 60-54, Decatur Eisenhower fell to Normal U High 45-42, […]

IBCA Hall of Fame Inductees include two from Franklin

This area is well represented in the latest Hall of Fame Class of the Illinois Basketball Coaches Association. The Winchester Invitational Tournament will be recognized for 100 years as an organization of the year by the IBCA. Two players from the area will be inducted. They are Ike Dodd of Waverly, and Tim Fischer of […]

CS8 to Add Quincy-Notre Dame in Football Only in 2024 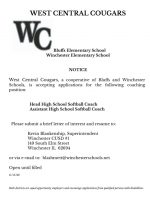 The West Central Sports Co-op appears to be moving on from Head Softball Coach Kandice Kunkel. In a post to the Scott-Morgan Community District #2 Facebook Page yesterday, the district is advertising for a head coach and assistant coach for high school softball. Back in October, the Bluffs School Board voted against the Winchester School […]

Two From Jacksonville on All State FB teams

ISVI Sophomore Lexi Mitchell came away with a pair of medals at the IHSA state swimming and diving finals on Friday and Saturday in Westmont. Mitchell competed in the 50 & 100 yard Free Style events, becoming the fourth student-athlete in ISVI history to qualify for state. Mitchell clocked a time of 38.36 seconds in […]

Hance Picked Up by Jacksonville Jaguars

Jacksonville High School and Northwestern Graduate Blake Hance has found a new team in the NFL. Hance was waived by the San Francisco 49ers on Saturday while the 49ers brought up Wide Receiver Willie Snead IV to help with injuries in their receiving corps. Hance was placed on outright waivers. Hance had been with the […]