A Canadian woman with blood ties to west central Illinois made a quick yet historic stop with her husband in Jacksonville Friday.

Virginia Johnson is from West Kelowna, British Columbia in Canada.

Johnson is the great-great-great granddaughter of Eliza Freytag Ayers, who in 1875 donated the land on East State Street in Jacksonville upon which Passavant was originally built. Johnson and her husband, Vern, are touring Central Illinois and its many sites connected to Ayers family history. As part of their visit to Jacksonville, Johnson and her husband examined a portrait of Eliza Freytag Ayers during a tour of Passavant Area Hospital on Friday.

In addition to viewing the portrait, the Johnsons viewed a large stained glass window in the hospital’s Beilschmidt Chapel. The window was given to Passavant by the children of Eliza Ayers at the end of the 19th century, roughly 120 years ago, in memory of their mother. 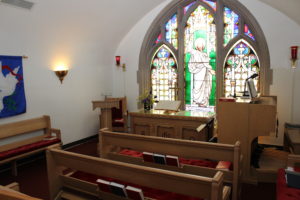