They’re moving forward with a multi-million-dollar capital improvement campaign at Our Saviour Catholic Parish in Jacksonville.

Results of a feasibility study were revealed at Routt Catholic High School on Tuesday night. Based on the results, the parish will work on raising money for school expansion and improvements to the church. Construction of a new parish hall would follow with a second fundraising effort after three to four years.

Church officials contracted Minnesota-based Walsh and Associates, who predicted the parish can raise $3.5-million for the project.

“Our parish has not asked the parishioners for any money since we built the church 40 yeas ago. We have no debt, our annual income is in the black, not a lot, but it’s in the black. So, we feel like this is a good time to begin this kind of a project,” capitol improvement committee co-chair Joan Ryan.says.

She explains what the next steps are.

“In this process, we’re working with the consultant who will develop our case study- what we want to do, why we want to do it, how we’re going to get there, and then publications from there, and then we’ll form some committees probably, and get some volunteers going,” says Ryan.

Reporter: “And you have to get permission from [Bishop Thomas Paprocki]?”

Ryan: “Yeah, and I talked to them this afternoon in Springfield, and they don’t expect any issues, just getting it in front of them.”

Several people attending last night’s meeting cited declining population in Morgan County as a concern for whether the school expansion is necessary, and specifically questioned whether a new preschool is needed. One person suggested turning the old Our Saviour gymnasium into classroom space instead.

Our Saviour officials argued grade school enrollment is up, and another person in attendance said a Catholic preschool makes sense as an alternative to District 117’s programs. 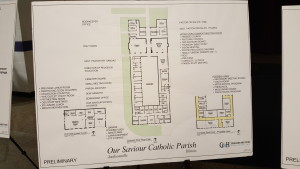 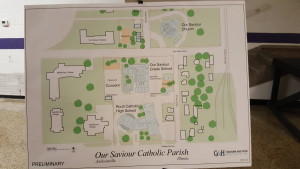 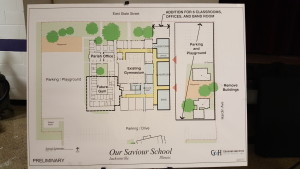