MacMurray College is setting the wheels in motion for an ambitious maintenance project to hit a big enrollment goal over the next few years. Dr. Beverly Rogers, who was recently announced as the new president of the college, has announced that the school is shooting to reach an enrollment of 700 students. 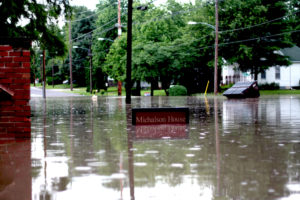 The Michalson Dorm’s sign on East Chambers Street as the result of torrential rain June 17-18, 2011. The dorm was shuttered shortly thereafter due to severe damages to its lower levels.

Rogers says that the current facilities at the college won’t be able to host that many students. In fact, she recently told WLDS/WEAI that the school currently only has 8 beds available on campus. However, with the campus’ master plan in place, she unveiled one of the ways the school is hoping to get enrollment to their target. “The first major project is the restoration of the dorm Michalson, which is closest to Clay Avenue right by the football field. We have already replaced the boiler and have made it so that we can install central air conditioning. The dorm is just a matter of re-doing some things. Again, this is part of our deferred maintenance plan and the dorm was damaged during the great flood of campus [in June 2011]. It’s been waiting awhile to get done. Currently, we have only 8 beds available on campus, so [our capacity] is very close. We are going to have to do this project very quickly. We already have the architectural drawings completed. We’re just waiting for the funding.”

Michalson was the last dorm constructed in 1966 on South campus. Originally a men’s dorm, it was named after the College’s tenth president, Gordon E. Michalson. The dorm has been offline for the last three years and had been rumored to be demolished at one time. Rogers says that in her second month as president she will begin travelling the country to meet with alumni coast-to-coast to solicit money for the college’s deferred maintenance plan to continue to grow the college. Kristen Chenoweth recently announced that the college gained 196 new students this fall, bringing the college’s overall enrollment to 525.