Many residents of the High School Apartments woke up early this morning.

The fire alarm reportedly began ringing this morning at around 3:15. The Jacksonville Fire and Police Departments arrived on scene, and the incident is still under investigation.

There is evidence that a wreath attached to someone’s door, as well as a wicker ornament in the opening of the first floor laundry area, were lit on fire by an unknown vandal or vandals overnight.

The burning of the wreath left considerably visible damage to the apartment door on to which it was attached. The occupant of the apartment was asleep inside and was awoken by a neighbor pounding on the door to alert them to what was happening.

A smell of burning rubber or plastic is still lingering through the hallways.

“We received automatic alarm from the High School Apartments. We arrived on scene finding light smoke throughout the first floor and a few residents walking around. There were two separate locations of decorative wall ornaments that had been lit on fire. They were contained to the area, burning in place and falling to the ground. One was self-extinguished, and the other was extinguished with a couple glasses of water. PD showed up, the owner showed up. There was an investigation to try and determine who might have done this, and at this time it is still undetermined.”

Captain Griffitts describes each of the two ornaments that were lit on fire.

“In the first floor laundry room, it looked as if there was a wicker-type ornament that was on the wall. When it was lit on fire, it had fell to the ground and burnt along a rubber baseboard in that room. It left a little bit of heat damage on the wall, so when we arrived we had taken a small part of that wall out to double check for extension in the wall. We found nothing, so there was some slight damage where we had to do that. Upstairs, where they lit another ornament that was on a door, it self-extinguished as it fell to the ground.”

This vandalism and alleged arson raises major safety concerns, including an increasing number of doors on the building that cannot be locked. One door that was lockable was partially broken in the fall of last year, and nothing has been done to remedy the issue or replace the locking mechanism.

There is no major fire damage to the structure of the building. 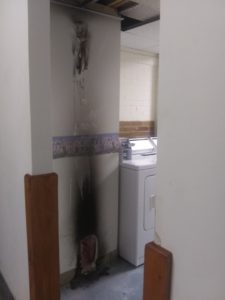