A single-vehicle rollover crash has occurred on Interstate 72, apparently near Alexander.

An eyewitness report described a four-door Chevrolet car rolled over in the center area of Interstate 72 between the lanes of traffic.

Pictures provided by the witness show the driver’s door of the vehicle pried open, but there is no one pictured with the vehicle.

Another person who witnessed the scene while traveling on I-72 said Illinois State Police were on scene, and that they did not see anyone inside or around the vehicle when they passed the scene.

WLDS/WEAI News will provide any further updates in regards to this rollover crash as soon as any additional information becomes available. 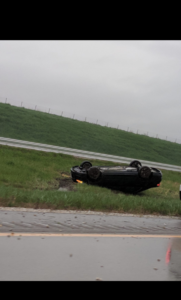