A celebration, 150 years in the making, kicks off tonight in Greene County.

Dick Roodhouse, President of the Executive Committee, says the community has provided a tremendous amount of volunteer assistance to make this event possible.

“We had fundraisers and everything. We knew it was going to take a lot of money to put this on for four days. When the executive board came to me with what they thought we would need for a budget I asked if we can do it and they said we can. I said if we can do it that is what we want, because we want a nice one.”

Roodhouse is expecting over 5,000 people at the celebration, which would more than double the city’s current population.

“I’ve got family coming from the east coast, Georgia, California and Wisconsin. We got people coming from everywhere that we are hearing about,” says Roodhouse.

Some of the special attractions include The Story of Roodhouse by Ken Bradbury, live music and fireworks. The majority of the events will take place at the Roodhouse Downtown Square. 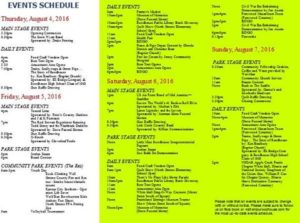