The City of White Hall lost at least three buildings to fire this morning, including the historic Union Hall. Union Hall had been a landmark in White Hall since 1867. The fire started next door at 119 North Main street and spread to the Hall. The cause of the fire is still under investigation. 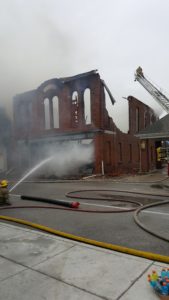 White Hall Mayor Tom Lakin says it is horrible to lose the buildings but the city will look to the future.

“It’s horrible. It’s sad for White Hall, all the history that got lost in a couple hours. We will just have to bounce back and come up with new, a chance to move forward.”

“You couldn’t ask for any better, Everybody I know of is here. Now it is just a matter of finishing up and cleaning up. I have already called in a crew to knock the walls in to get it safe, then we will go from there.” 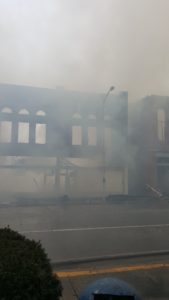 White Hall Fire Chief Garry Sheppard says he is thankful so many of the area fire departments responded to the blaze.

“Mainly what we needed today was water. We were short handed today too, that is the story with volunteer Fire Departments, you don’t have a full crew sometimes so the help was needed.” 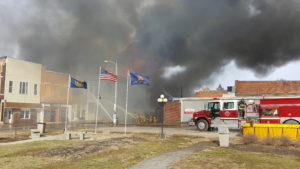